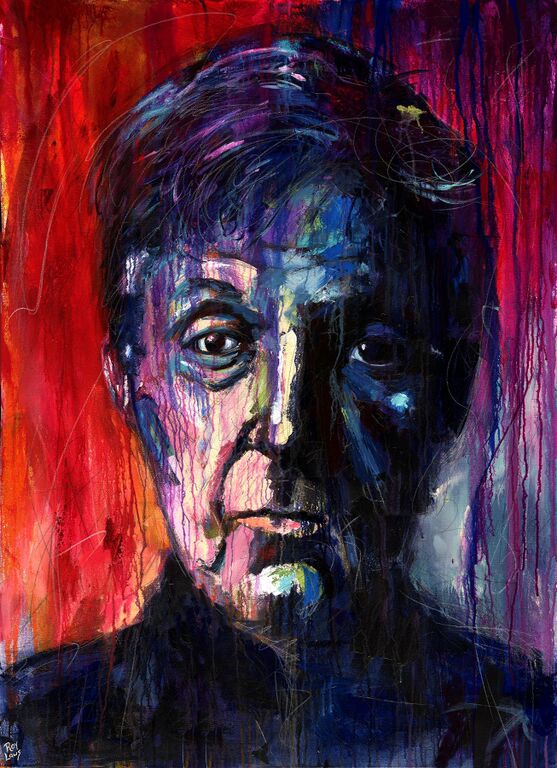 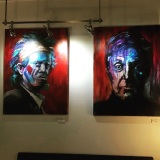 When I was about eight years old, I taped “Live and Let Die” from a Walkman. Remember those? I didn’t even know who The Beatles or Paul McCartney were at the time. In fact, that’s when McCartney was with a band called Wings and the song came from a James Bond Movie. Man, I loved it! You know, they say people are either a fan of The Beatles or Elvis. I’m definitely a Beatles guy. It’s incredible to me that these two creative giants, John Lennon and Paul McCartney, even found each other. Their talent is astounding. In a way, they remind me of David Bowie – they could have done the same thing for their entire career and it would have worked. People still would have bought tickets and albums. But they didn’t want to be stagnant. They kept evolving and adapting to the culture. It was brilliant! This painting is one of a series of three that I call the Giants of Rock and completed in 2016. It includes Bob Dylan, Bruce Springsteen, and Paul McCartney. As an experiment, I darkened half their faces. In McCartney’s case, I wanted to capture his older self because everyone likes to recreate the younger images. I love the lines in his face that show his age and character much more than the young fresh-faced Paul. The original piece is 36 x 48 and looks great in the home or office.