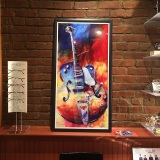 AS SEEN IN BRIAN SETZERS HOME STUDIOI’m a huge Brian Setzer fan! Whether he’s performing Rockabilly with the Stray Cats, Swing with Brian Setzer Orchestra, or solo, I don’t care. I love it all. Maybe it’s because he was influenced by so many of my heroes, including The Beatles, Rolling Stones, and Hank Williams. Setzer wasn’t a Hank fan, but his dad played the album when Brian was young. All those influences definitely explain his persistent Rockabilly style.

I remember when MTV launched in August 1981. The Stray Cats were part of that original generation of music videos. In fact, “Stray Cat Strut” was one of the Cats first videos to air. But even before MTV was unveiled, they were part of a handful of bands recruited to make promotional videos. They had no idea what they were getting into, but they loved it and so did the audience.

I thought Brian Setzer was a guitar virtuoso! So, I painted Setzer’s Gretsch guitar out of sheer respect. It made my day when his music manager bought a giclée reproduction of the original and gave it to Setzer as a birthday gift. Original painting size is 24 x 48 and full-size (and smaller) giclee on canvas reproductions are available. Contact me for custom sizes.