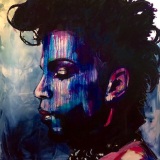 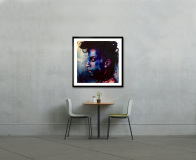 I painted this 48 x 48 canvas the day after Prince died. I’m a huge fan since childhood, so it hit me hard. His work has always been inspiring to me and I needed to thank him. So, I poured out my grief and gratitude through paint brushes – the best way I know how. I’ll never forget the first song of his that I heard. It was December 1982 and his first music video was released on MTV. He sang “1999” and I immediately loved the music, his voice, and the production.

As I followed his work over the years, I was struck by his talent and creativity. He ran parallel to another musical hero of mine, David Bowie. Prince played every instrument and was always reinventing himself. It was like every song could be categorized in a different genre. Like David Bowie, Prince could have picked any genre, look, or style and he still would have sold tickets and albums with little effort. But he liked changing things up and that’s a big appeal to me. He even stopped using his name for a while.

Everything Prince did was remarkable. In fact, someone once asked Eric Clapton what it was like to be the greatest guitar player in the world. Clapton answered, “I don’t know. Ask Prince.” As it turns out, I have a mutual friend with the guitarist from The Revolution (Prince’s band), Dez Dickerson. Dez saw the painting and is using it in a documentary he’s making about Prince, including his music career and life. The original sold a while back, but I have several options available for sale.

Custom Sizes available all the way up to 38 x 38. Read more about it here.